Ghana sits on the Gulf of Guinea in West Africa, surrounded by Togo, Burkina Faso, Côte d’Ivoire and the Gulf of Guinea. Ghana was the first nation in Sub-Saharan Africa to achieve independence from Britain in 1957. Accra, the capital city, is home to over two million people and is situated on the Atlantic coast. Accra is the site of the African Enterprise Ghana office, overseen by AE Team Leader Bernard Owusu-Sachie. Once called the Gold Coast of Africa, Ghana has rich gold resources and is also well known for the production of cocoa, and in recent years, tourism. The nation is a consummate story of rapid and effective industrial success on the African continent. Ghanaians are largely a free people, with a stable government and growing economy. However, in the last few years, Ghana along with other nations in West Africa has felt the strain of rising inflation, job scarcity and an increasing cost of living.

Bernard joined AE Ghana in 2006 as Project Manager and Accounts Officer, moving to a Mission Coordinator role in 2010 before becoming Team Leader in 2014. Prior to working with AE, Bernard worked as a school tutor and later as a pastor of Grace Community Church in the Brong Ahafo region of Ghana. Bernard has a particular heart for teaching and mobilising people for evangelism. 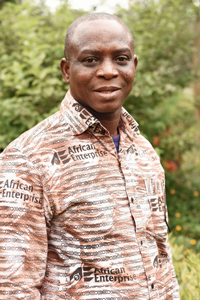 Over a million children in Ghana, ages 5-15 live on the street and are involved in such things as robbery, prostitution and drug addiction. Living on the street excludes these children from basic human rights such as safe family environments and protection against exploitation. Several years ago, African Enterprise began a program to alleviate associated problems with ‘streetism’ and instead support and empower children. Every year through the Ghana Street Children Apprenticeship Project (SCAP), 50 children are brought off the streets and equipped with skills through vocation courses including dressmaking and tailoring, computing, hairdressing and beautician, aluminum fabrication and auto mechanics. Along with learning life skills, they are trained and discipled in the Gospel.

Along with young people living on the streets, the number of women engaged in prostitution in Ghana is troubling, especially in big cities likes Accra and Kumasi. The Women’s Rehabilitation Project in Ghana aims to drive out commercial prostitution in these urban places through teaching women about the redemption that can be found in Jesus. It also aims to retrain these women with the skills to feel empowered once more, and to rebuild their often shattered self-esteem. Participants are trained in skills including detergent production, batik making, screen printing, soap making and pastry baking. Hundreds of women have been trained since the inception of the program.